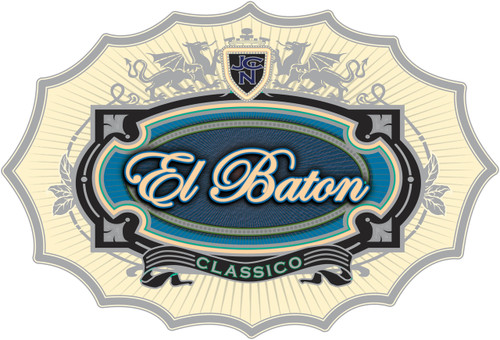 "When El Baton cigars was first released in October 2008 from the J.C. Newman Cigar Co., it came in only one size, the Double Torpedo. Now three more sizes of the highly rated El Baton cigars have been added to the brand of thick cigars, none of which are thinner than a 54 ring gauge. El Baton cigars first began as a vintage brand made by J.C. Newman in Cleveland back in 1914. It was a nickel cigar that was made by hand with Cuban tobacco, but disappeared with the onset of machine-made cigars in the 1920s. The new incarnation is in keeping with its history as a bargain smoke, but rather than using Cuban tobacco, El Baton is J.C. Newman’s first Nicaraguan puro, and it is a very tasty brand. The most impressive was the Double Torpedo, its debut size.
It scored 91 points." Cigar Insider Scroll down for cigar size chart

El Baton cigars are made at an exclusive JC Newman Nicaraguan factory, fully dedicated to them. El Baton Nicaraguan Puros are have continuously received high scores from well known cigar magazines. Featuring a rare flavorful Corojo wrapper with a medium-to-full body and notes of spice. Using all long filler, provides you with a quality smoke with a beautiful ash and smooth burn. El Baton cigars are offered in boxes of 40 with two silver foil banded bundles of 20 inside each box. Complex, nutty with bold spicy flavor.
Touches of oak wood and black pepper have been noted, as well as leathery transitions such as mocha and pepper.
Consistent full-bodied cigar. with pleasant surprises throughout.